[MM Curator Summary]: GAO found that CMS does not know how much was actually paid through the $20B provider-incentive model- they just have estimates from states.

States and federal Medicaid funds pay managed care plans based on the number of beneficiaries.

The managed care plans then pay health care providers for services. But starting in 2016, states could propose ways to steer payments to providers that met certain goals, such as improved timeliness.

As of February 2022, Medicaid approved 79 proposals just for payments starting on or after July 1, 2021—totaling $20 billion in estimated payments.

Medicaid is trying to improve oversight, but there are still unknowns. For example, states only have to report estimated payments, so Medicaid won’t know how much of that $20 billion is paid out. 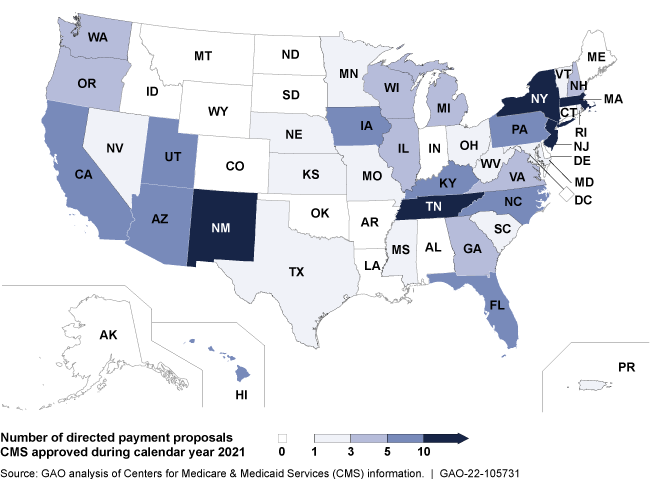 The federal government and states share responsibility for financing Medicaid payments for care provided to Medicaid beneficiaries. One way states may provide Medicaid services is under a managed care model. Generally, managed care plans determine how they pay providers. In 2016, the Centers for Medicare & Medicaid Services (CMS), which oversees Medicaid, began allowing states to direct payments to providers in Medicaid managed care under certain circumstances and generally contingent upon CMS approval. Within those parameters, states determine the criteria for provider receipt of a payment. For example, a state may establish a directed payment for providers that meet a performance target for improving timely access to care. State use of directed payments has become widespread.

Widespread Use of State Directed Payments

Notes: CMS approval is generally required before a state can implement a directed payment, which the agency began permitting for managed care contract rating periods on or after July 1, 2017. States’ contract rating periods differ and may not correspond with the year CMS approved the state directed payment proposal. Dollar amounts for approved payments beginning on or after July 1, 2021, are state estimates from 79 proposals in 2021 and 2022.

CMS has taken recent actions and has planned others to enhance oversight of state directed payments, though the effectiveness of these efforts is unknown. In 2021, CMS clarified guidance and began requiring states to submit additional information, such as estimated payment amounts, prior to approval of directed payments, in part, to strengthen program integrity. Other efforts are underway. For example, CMS officials said the agency is considering ways to make approved proposals public, which would increase transparency.

Although CMS has recently made efforts to enhance oversight and has others planned, information gaps remain; for example, CMS requires states to estimate the amount of directed payments prior to approval, but CMS does not have information on the actual amounts paid. In December 2020, GAO made a recommendation that if implemented would address some of the information gaps CMS faces. Specifically, GAO recommended CMS should collect and document complete and consistent provider-specific information about Medicaid payments to providers, including state directed payments. Doing so would likely improve CMS’s ability to identify potentially impermissible financing and payments for additional review. GAO plans to continue examining CMS’s oversight of these payments.

Why GAO Did This Study

Medicaid—a joint, federal-state health care financing program—covered an estimated 78 million individuals at an estimated cost of $709 billion in fiscal year 2021. CMS is responsible for ensuring that Medicaid payments and the way that states’ finance the nonfederal share of these payments is consistent with federal requirements. In general, states may not make additional payments for services covered under the contracts nor direct managed care plans’ payments to providers. In 2016, CMS issued regulations establishing the circumstances under which states can direct payments under managed care. In 2021, CMS updated its state directed payment guidance and review process.

GAO conducted this work under the Comptroller General’s authority to conduct evaluations to assist Congress with its oversight responsibilities. In this report, GAO describes (1) the use of state directed payments in Medicaid, and (2) CMS’s changes to guidance and oversight of these payments. To do so, GAO analyzed agency data and documents on approved payments; reviewed CMS guidance and forms; and interviewed CMS officials.