Florida is in the planning phases of dealing with the more than 1M members who joined its rolls as part of the pandemic.


Over one million Floridians have enrolled in Medicaid over the course of the pandemic. However, this large influx of beneficiaries may shift as the federal public health emergency (PHE) declaration — and the accompanying Medicaid disenrollment freeze — could end as early as mid to late January 2022.

The latest enrollment numbers from the Agency for Health Care Administration (AHCA) show an overall increase of 32.3% across the state since March 20, 2020. The only program with a significant drop in enrollment is the Florida Healthy Kids program. Audrey Brown, president and CEO of the Florida Association of Health Plans (FAHP), said that the drop reflected a transfer of those beneficiaries to Medicaid. 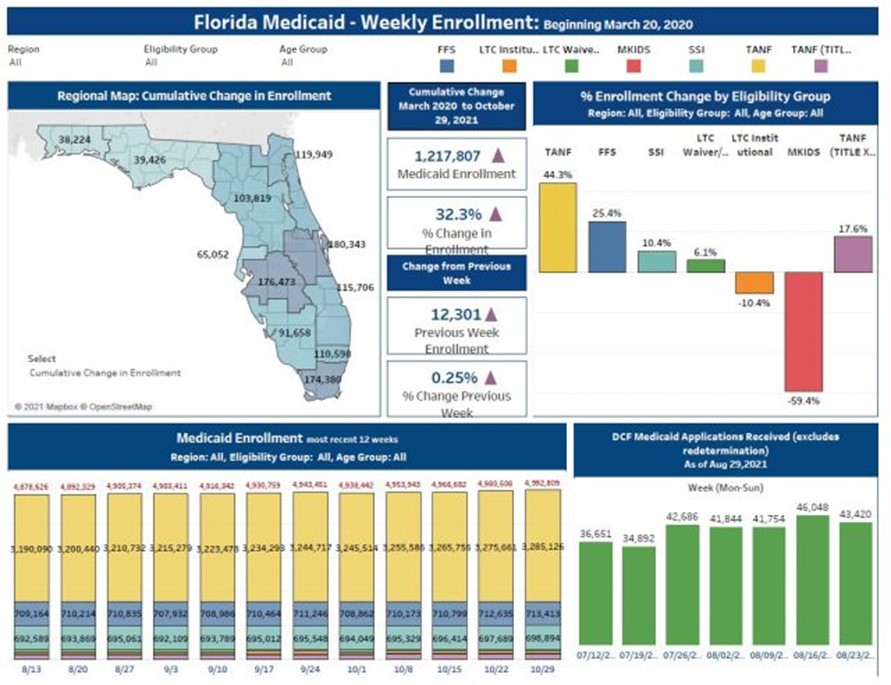 Floridians under Medicaid are currently protected from being disenrolled due to the Families First Coronavirus Response Act. However, once the PHE ends, the Department of Children and Families (DCF) will need to redetermine each member’s eligibility. Conditions that lead to ineligibility for Medicaid include turning 65 and needing to transfer to Medicare, pregnant people reaching the end of the postpartum coverage period, and changes in circumstances, such as increased income.

The Centers for Medicare and Medicaid Services (CMS) have released guidance for states as they begin the redetermination process, but have not announced exactly when the PHE will end. The most recent PHE renewal will expire on Jan. 16, 2022.

Brown said that state Medicaid agencies will receive a 60-day notice prior to the end of the PHE declaration. Until then, the best they can do is coordinate with other state agencies to prepare for the redetermination process.

“I think the agency, with our health plans as partners, have been as transparent as they can possibly be. But obviously, the unknown is when that state of emergency at the federal level will be ending. And so for all of our purposes, we just continue the dialogue. We talk regularly with AHCA and the DCF to find out from them if they’ve heard anything new, and I know that the agencies are prepared to reach [the determinations] as quickly as possible.”

Once the agencies inform the health plans of a member’s change in eligibility, the plans (FAHP has 18 member health plans across the state) will notify them in advance of the end of their services, as well as other options for health coverage. Florida is one of 14 states that has not yet expanded Medicaid since it became available in 2014. Because of this, people may go on the state exchange to look for coverage from private plans.

Brown says that the exchange is still an affordable option for Floridians.

“We have a very competitive, large group of health plans that participate on the exchange, [which is] heavily federally-subsidized. Even though people may not be qualified for Medicaid because of their financial eligibility, there are a lot of people that will pick an exchange policy and will even be up to 100% federally subsidized.”

Florida led the nation with the highest number of newly enrolled members in the state marketplace during the summer Special Enrollment Period (SEP). A CMS report stated over 487,000 Floridians participated in the SEP.

The 2022 open enrollment for the federal health insurance marketplace kicked off Nov. 1, and will continue until Jan. 15, 2022, the day before the PHE declaration expires. Participants who sign up by Dec. 15, 2021 will have coverage take effect on Jan. 1, 2022.