[MM Curator Summary]: The data can not be used for much; some call for a national survey to be done by CMS.

CMS recently released its assessments of states’ Medicaid administrative data and Colorado is one of 17 states where race and ethnicity data were of “high concern” due to missing beneficiary information.

The agency reported that the Transformed Medicaid Statistical Information System (T-MSIS) Analytic Files (TAF) race and ethnicity data were missing for more than 40% of beneficiaries in Colorado.

CMS stated that these data were “unusable” in 5 other states and of “low concern” in 15 more.

The assessments were made based on the following criteria: (1) Percentage of beneficiaries missing race and/or ethnicity values in the T-MSIS Analytic Files (TAF) and (2) the number of race/ethnicity categories (out of 5) with a percentage point difference greater than 10 between the TAF and American Community Survey (ACS) data.

The Biden administration has made equity a central component of its policy agenda and health care disparities have been exacerbated and exposed by the pandemic. 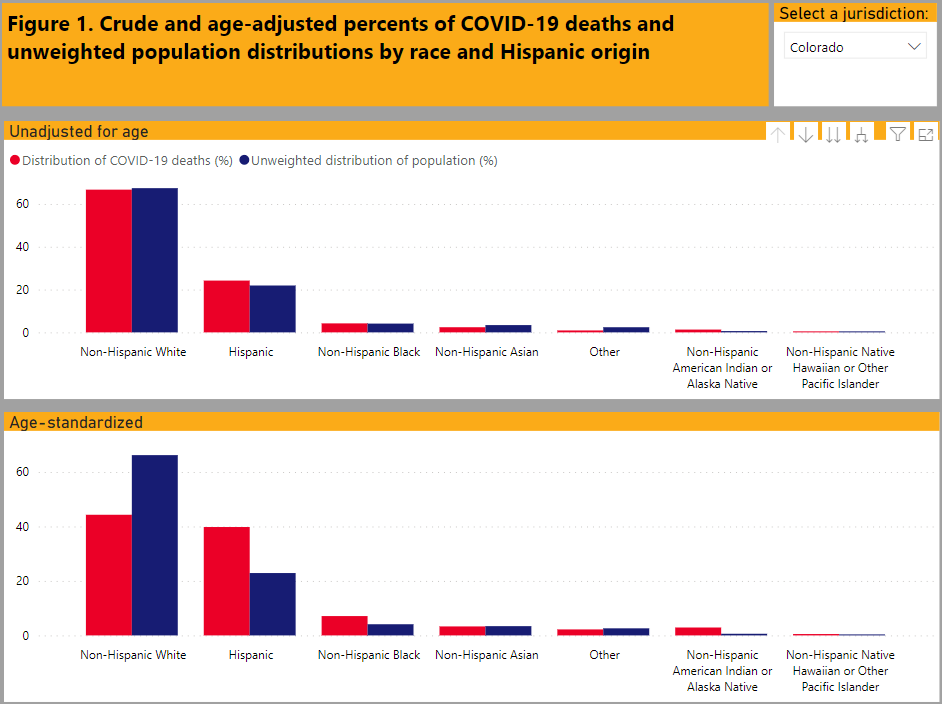 (Distribution of COVID-19 deaths and population distributions by race and ethnicity. Source: CDC)

This disparity is even greater when the percentages are age-standardized (adjusted for differences in the age distribution across racial and ethnic groups).

“Because with COVID-19, we discovered that people who are Black and brown were exposed to a high percentage of deaths, just based on a variety of different circumstances. Maybe they’re frontline workers, maybe it’s because of the environment that they’re living in—condensed quarters and those kinds of things,” said Sen. Rhonda Fields (D – Aurora), Chair of the Senate Health & Human Services Committee, speaking to the importance of the Colorado Health Equity Plan during a State of Reform panel discussion in 2021.

“We passed Senate Bill 181 to make sure that we create an equity lens and every department that reports to the governor, so that means labor, that means housing, that means public health, just everything everyone has to have a goal that addresses disparities as relates to health. So that’s important.”

Medicaid enrollment forms pose race and ethnicity as optional fields for beneficiaries. Distrust over how agencies will use the information has prompted many enrollees to opt out of sharing this crucial health equity data.

Researchers at the University of Minnesota’s State Health Access Data Assistance Center have suggested three strategies to improve the country’s overall race and ethnicity data quality in the Medicaid program:

According to a recent Health Affairs report, health policy experts suggest a national survey might be more effective at collecting better quality data and closing the gap on disparities.

“A national Medicaid survey could help support more comprehensive monitoring of healthcare need relative to use, and if designed to oversample racial and ethnic minoritized populations, could also support more rigorous monitoring of quality of care and disparities within the program,” the report said.

CMS has not conducted a survey of Medicaid enrollees since 2014-2015, when the agency fielded its Nationwide Adult Medicaid Consumer Assessment of Healthcare Providers and Systems (NAM CAHPS).

The authors suggest expanding on existing infrastructure and investing in a national survey would improve the evaluation and advancement of health equity in the Medicaid program.