The state watchdog’s report says poor performers shouldn’t be rewarded if they fail to improve and is recommending progressive measures to force fixes — including barring repeatedly low-ranking facilities from additional public dollars.

“Bottom line: New Jersey taxpayers should not be funding nursing homes that have failed to improve for years, appear unlikely to improve, and put residents in harm’s way,” Acting Comptroller Kevin Walsh said in a statement.

The comptroller’s office analyzed New Jersey’s 339 nursing homes and found 15 of them earned the lowest score on the national grading rubric for long-term care facilities for most quarters in 2020 and 2021. Nursing homes, which have been under close scrutiny amid the COVID pandemic, are evaluated based on federal guidelines set by the Centers for Medicare & Medicaid Services on a scale of one to five stars, with one being the lowest.

“These are facilities that year over year performed poorly in some very critical areas, specifically staffing shortages and the amount of nursing hours that are available,” said Laurie Facciarossa Brewer, the state’s long-term care ombudsperson, who consulted with the comptroller’s office on the report.

“It would appear that there doesn’t seem to be an effort by those facilities to improve. It almost seems as if a one-star rating is basically baked in as the cost of doing business,” she said.

“It’s not the minor stuff that gets you a one-star rating. It’s having multiple deficiencies over time in a wide array of areas,” Brewer said.

“They’re making a profit off of the one-star facilities all while taxpayers are paying for one-star care,” Walsh said.

According to the report, the 15 low performers received more than $300 million in Medicaid funding between 2017-2019. And many have scored poorly since 2013, the data shows.

The comptroller’s office is recommending the state issue a series of restrictions to problem facilities that range from a warning, banning the nursing home from accepting new patients and ultimately, withholding Medicaid dollars. One of the problems the report identified is that the state agency overseeing residential care is different from the agency that distributes the money.

“The agencies need to work together in order to ensure that the residents’ interests and the Medicaid dollars that the state spends are all protected,” Walsh said. He said New Jersey would be the first state to withhold Medicaid dollars from low-rated nursing homes if it decides to accept the recommendation.

Nursing homes have been under increased scrutiny in the last two years after the pandemic sickened and killed more than 8,000 residents and 148 staff, state data show. Brewer said the report’s suggested fixes will complement larger reforms already underway.

The comptroller’s office has also released a dashboard of the 15 lowest-performing facilities here. Four of the 15 are in Burlington County. If the state considers the report’s recommendations, which could ultimately limit the number of patients at these facilities, it could limit where residents can access long-term care.

“It underscores how very difficult it is when you’re talking about people’s health care,” Brewer said. “Everybody involved has to be really, really mindful of the fact that regardless of how bad the place is, it is where somebody lives.” 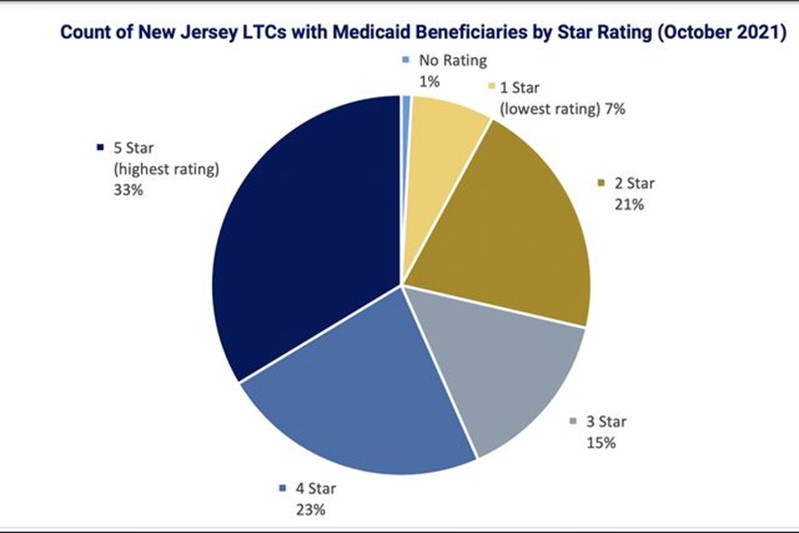