For you to understand the basics about key factors that lead to the current opioid crisis.

The opioid crisis built up over a period of 20+ years. During this time, changes in physician prescribing patterns (in which opioids began to be prescribed for chronic pain instead of only for severe post-surgical pain) allowed much more access to the addictive drugs. Criminal activities related to pill mills and international drug trafficking cartels also exploited the increased access. And public health programs, including Medicare and Medicaid spent billions of dollars on the new prescriptions.

1- The impact of physician prescribing behavior

2- Supply and diversion issues, including international drug trafficking related to the opioid crisis

3- The impact of Medicaid and Medicare payments on the crisis

Q1: How has physician prescribing behavior contributed to the Opioid Crisis? 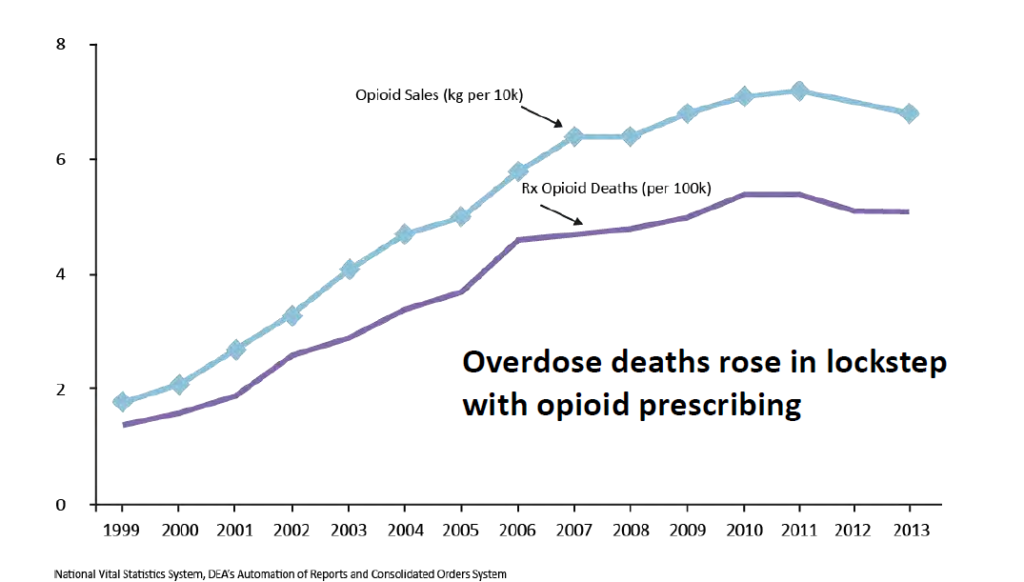 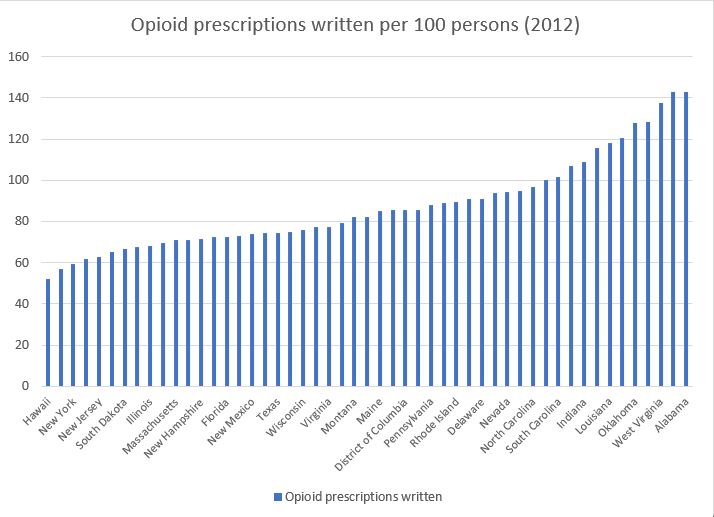 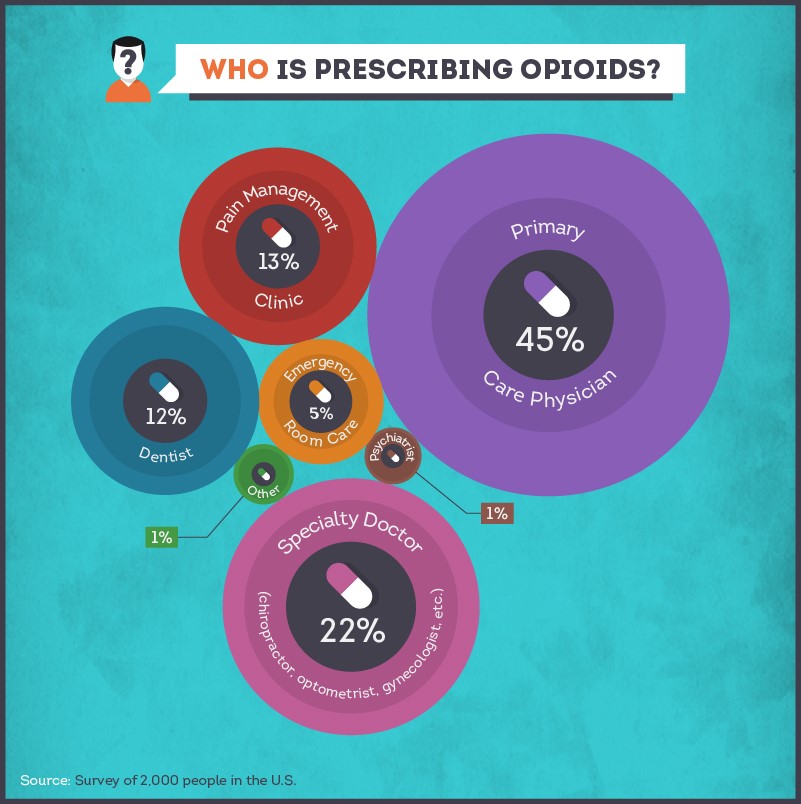 In the late 1990s, physicians started prescribing opioids for a wider range of conditions which previously were not treated with opioids. This lead to greater access to opioids beyond surgery and cancer patients (who previously were the main populations prescribed opioids.  Deaths from oxycodone and hydrocodone began to increase once the “script-creep” occurred. Many researchers blame pharmaceutical company marketing practices to doctors. During the mid to late 1990s, pharmaceutical companies messaging to doctors included assurances that prescribing opioids for less severe pain needs would not lead to addiction. Examples of these issues include:

As of 2017, multiple states were suing Purdue and other opioid manufacturers for false marketing.

There was an increased focus on chronic pain in the 1990s that lead to higher rates of opioid prescriptions- About 100M people in the US (1 out of every 3 persons) were estimated to have some type of chronic pain. Medical studies and publications began focusing on pain management for this population. The new quantifications of chronic pain sufferers helps support the push for increased access to pain medications by pharmaceutical companies, doctors and federal regulators.  Some analysts have shown physician-marketing messages from companies like Purdue pharma to claim that pain is under treated and oxycontin is not addicting. In 2000, the Joint Commission on Accreditation of Healthcare Organizations (JCAHO) joined the effort to focus on broader pain management with its release of a 0 to 10 pain scale and materials referring to pain as “the 5th vital sign.” JCAHO guidelines began to call for management of any pain over 0. Patient satisfaction questions around pain management were also added to hospital surveys in the early 2000s, and by 2016 patient satisfaction (in general) became a core, incentivized payment measure for providers.

Q2: What is drug diversion?

Given that prescription opioids themselves can be legal when prescribed by a doctor and taken appropriately, creating a large enough supply to support illegal drug trafficking is an important factor in the epidemic. Although an addict may first become addicted in a treatment plan that occurs legally, to feed the addiction in the later stages requires illegal supply. Removing drugs from a legal supply channel and places them into illegal channels is called “diversion.”

One of the main ways drugs are diverted is through “pill mills.”

Pill mills are illegal drug operations made to appear as if they are legitimate clinics. They have doctors that diagnose patients just so they can prescribe them opioids to feed their addiction. They will usually charge an “office fee” to the addict, which can range from $200 to $400 a visit. For a pill mill that sees 60 patients a day, that translates into up to $24,000 / day in revenues. Because of their illegal nature, they often open and close quickly, setting up in strip malls and similar locations.

In 2007, Chris George opened a pain pill clinic in south Florida called American Pain. He was 27 and was already an ex-convict. He had no medical training.

Working with his twin brother to recruit doctors who would help operate the scheme, he eventually operated 6 different clinics that illegally dispensed opioids to addicts. At the height of their crimes, their clinics were seeing 500 patients a day, bringing in $400,000 a day in illegal revenues. By 2009, Chris had made $40M. 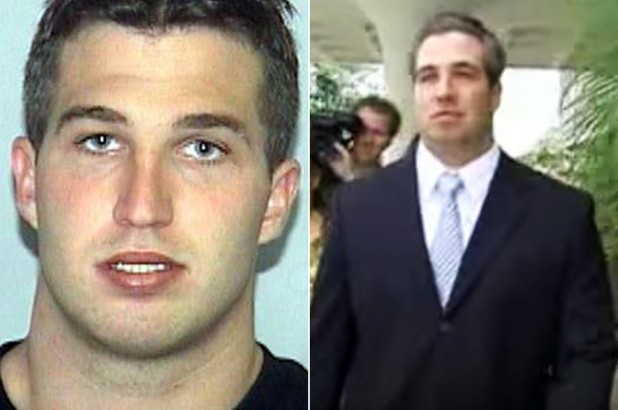 Florida was an ideal market for several key reasons. 1) There was no prescription drug monitoring database at the time to identify high volume prescribers or doctor-shopping patients. 2) There were no state requirements about who could open a pain clinic. All you needed was a doctor with a DEA license. At the time of the American Pain scandal, Florida physicians were prescribing 9 x more oxycodone than doctors in all other states combined. Florida oxycodone scripts were around 41M doses compared to a total of 4.8M doses in the rest of the U.S. American Pain alone accounted for 20M pills being diverted in a 2-year period.

The George brothers hired multiple doctors and paid them a per patient fee. The larger prescriptions they wrote, the more money they made.

They also had drivers on staff who would carry addicts from other states to come to Florida to get drugs. One driver was a 17-year old girl who would make a weekly run from Louisville, KY with a carload of people weekly. It was a 17-hour drive one-way.

American Pain got caught because of how egregious its operations were. The George brothers staffed the clinics with strippers and had bouncers in the parking lot. Addicts would shoot up in the parking lot and urinate publicly in front of the store. 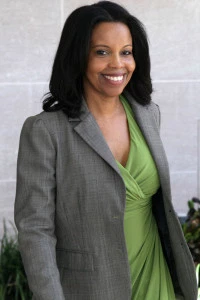 "Dr" Cynthia Cadet, who prescribed pills for 70 patients a day. At least 51 patients went on to overdose on prescriptions she wrote.

George’s home and clinics were eventually raided by the FBI in 2010 and shut down.

What did Florida do to prevent another American Pain-type scheme?

How to identify a pill mill in your neighborhood

Not all pill mills are obvious and indiscreet. There are several signs you can look for:

Q4: How have Central and South American Drug Cartels contributed to the Opioid Crisis?

In addition to diversion using doctors in the U.S., there are also international drug trafficking forces at play in the opioid crisis. The clearest example is the use of the southern border of the United States to smuggle in heroin and Fentanyl.

Heroin smuggling through the southern border of the United States increased as the opioid epidemic took hold - As we discussed in earlier lesson topics, as the opioid epidemic took hold, many addicts switched from opioids to heroin because heroin is now cheaper than prescription opioids. Drug cartels in Mexico began to flood the U.S. market with more heroin to match the increased demand. The main suppliers of heroin to U.S. cities are all now Mexican criminal organizations. According to the DEA, heroin has become a critical part of Mexican cartel revenues.

The main cartel supplying illegal fentanyl to addicts in the U.S. and Canada is Mexico's Sinaloa Cartel. This cartel has been tied to 80 percent of the fentanyl seized in New York. 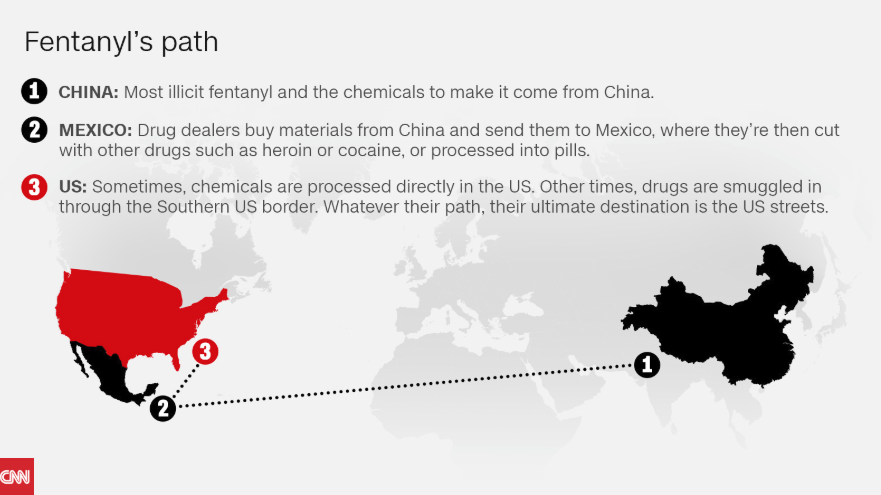 Q5: How have the Medicaid and Medicare programs contributed to the crisis?

While Medicaid advocates will typically refute any role Medicaid played in the crisis, the answer is more complex - Medicaid has been a part of the problem in that it paid for much of the supply and did little to monitor prescribing patterns when it was in a unique position to identify outliers since Medicaid programs have access to the claims data.

Addicts can’t get pills without a doctor writing a prescription, and they can’t pay for them without money. Much of the money used to pay for the pills for addicts came from tax dollars via Medicaid payments for pills. While much of the prescription volume paid for by Medicaid is for legitimate purposes, a significant amount is being used to fuel the opioid crisis.

Medicaid may be the single largest purchaser of opioids– Nationally, Medicaid programs paid 34M claims for opioids in 2012. Those 34M claims cost $500M.

When you look at the state level, you can also see the significant role Medicaid plays in paying for opioid drugs. Florida Medicaid paid $27M for 49M doses of oxycodone in only 2 years. At least 1M of those doses went to pill mills. There were a total of 1.4M adults on the rolls at the time. That’s more than 25 pills for every single adult with a Medicaid card. When you limit the math to just those who actual got pills, its 90 pills per member. 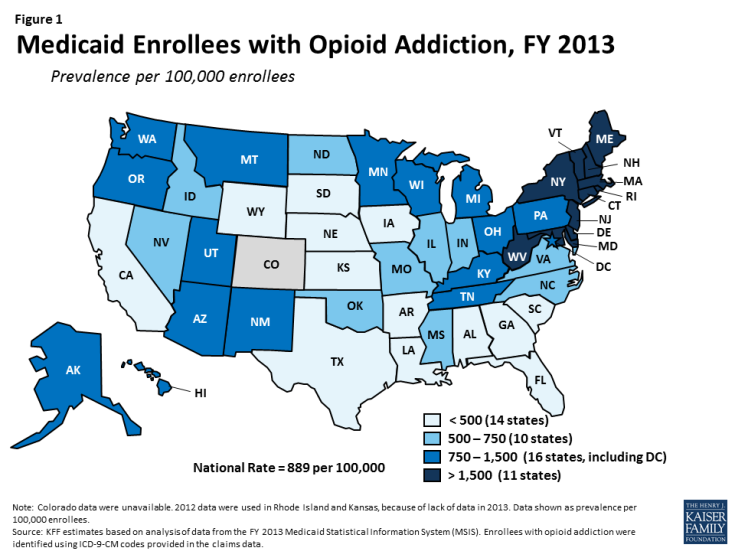 Fraud cases to buy and sell opioids are rampant in the Medicaid program – Studies conducted recently have shown that there is an extensive problem with Medicaid fraud related to opioids. At least 1,072 people were convicted of using Medicaid to illegally obtain opioids between 2010 and 2016. It is important to keep in mind that convictions represent only a small percentage of the actual use of Medicaid to illegally obtain drugs.

Fundamental perverse incentives are built into the Medicaid program: a member can get often get 240 OxyCodone pills for a $1 copay and then sell those same drugs on the street for $4,000.

Critics of this line of argument point to problems with timing: increases in opioid deaths began (in the late 1990s) before Medicaid expansion (2014 and beyond). This suggests that Medicaid payments for opioids did not cause the crisis, but increased funding without increased oversight of narcotics payment could have made it worse. The additional acceleration of opioid deaths in 2014 would suggest this connection is in play.

The chart below illustrates this argument. As seen in the chart, opioid deaths were already on the rise in expansion states before they chose to expand. 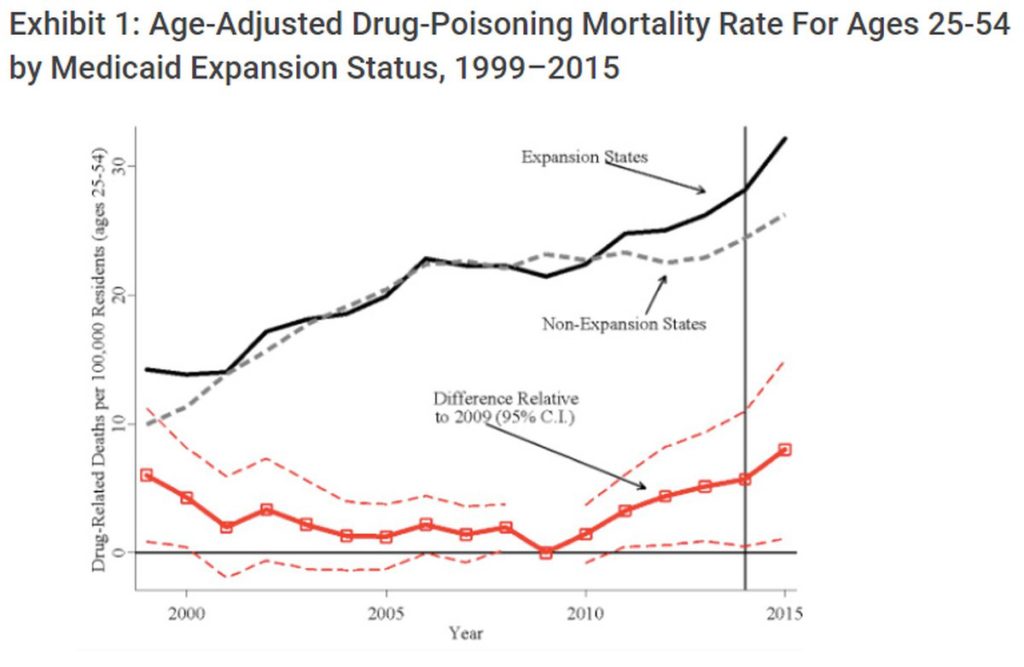 It is important to realize the Medicare is also a significant payer of opioid claims. A 2011 report from the Government Accountability Office found several alarming facts, including:

In 2017, GAO looked at the issue of opioid abuse in Medicare again and made several recommendations:

The chart below shows the substantial role Medicare plays in paying for opioids. 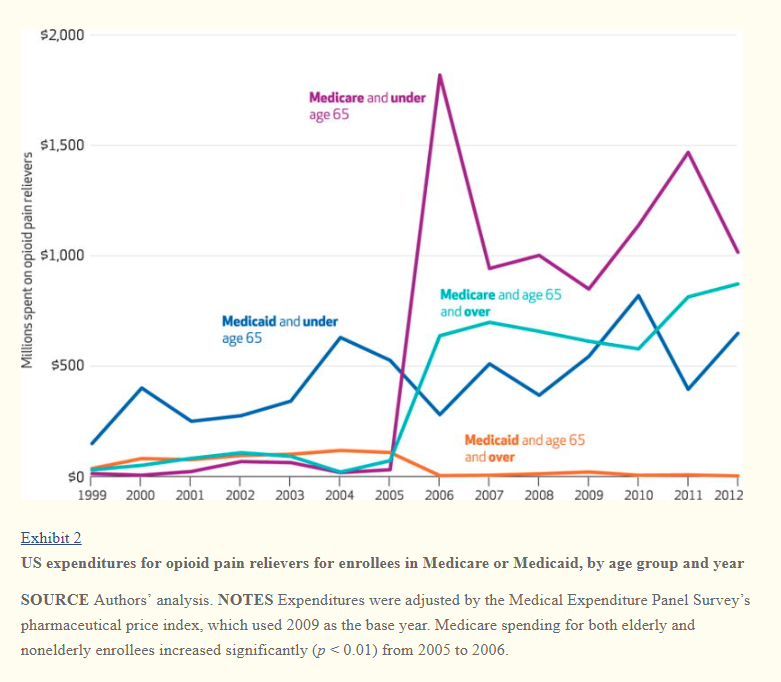 Back to: Understanding the Opioid Crisis Part 2 > Course Lessons