You must first complete Lesson 3: What are the types of treatment for Opioid Use Disorder? before viewing this Lesson

The opioid crisis (also called the opioid epidemic) is the accelerated increase use of opioid drugs during the 1990s and through current times (2018 and beyond). In addition to increases in prescription and non-prescription drug use, there has been an extraordinary increase in opioid addiction treatment and overdose deaths. While most of the policy discussion focuses on the crisis in the United States, a similar pattern has also occurred in Canada. The crisis is usually measured in terms of overdose deaths, number of estimated addicts and financial costs. Some population are more severely affected than others- rural, white middle aged males are much more likely to be impacted by the opioid crisis than other population groups.

1- Understanding the size and severity of the crisis

2- Understanding how it was recognized as a crisis

3- Patterns and characteristics of populations most affected

Q1: What is the Opioid Crisis?

The opioid crisis (also called the opioid epidemic) is the accelerated increase use of opioid drugs during the 1990s and through current times (2018 and beyond). In addition to increases in prescription and non-prescription drug use, there has been an extraordinary increase in opioid addiction treatment and overdose deaths.

Quick Facts About the Opioid Crisis

Q2: What is the size of the crisis?

There are many ways to measure the size of the crisis- overdose deaths, costs of treatment, number of Americans addicted, babies born with NAS and other metrics. Most estimates say 2M Americans are addicted to opioids. There have now been more than 400,000 overdose deaths opioids (prescription and illegal) since 1999.

Measured by number of deaths per year 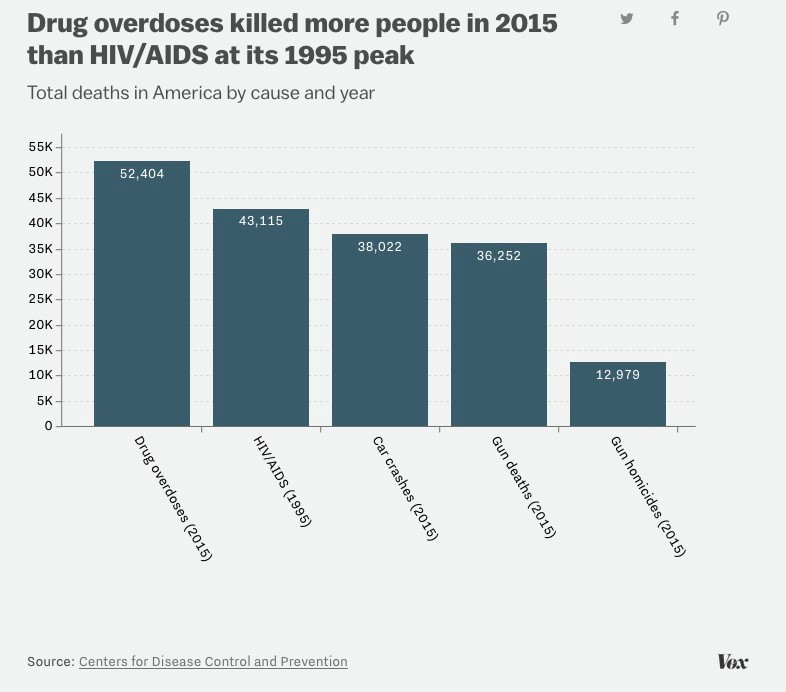 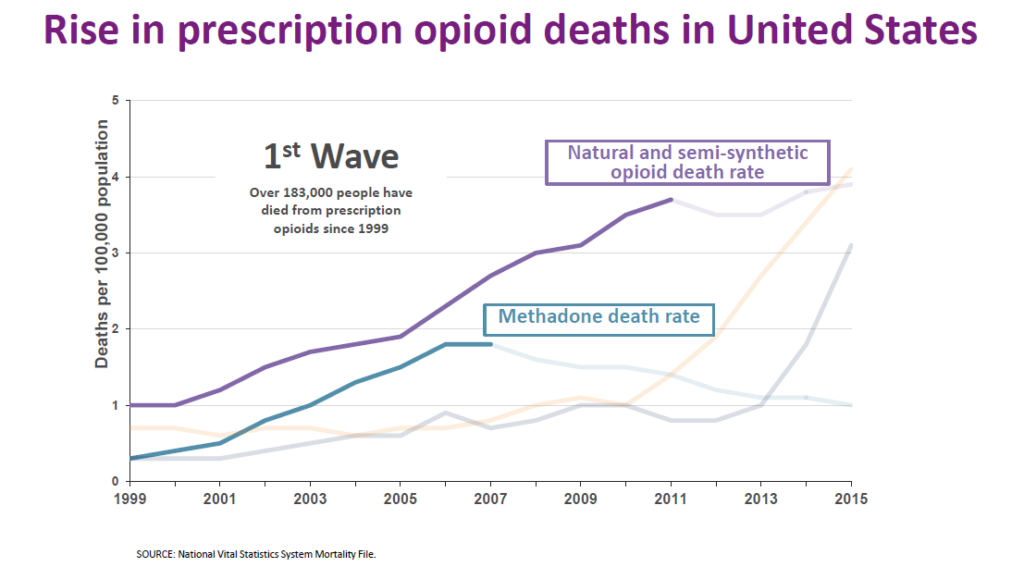 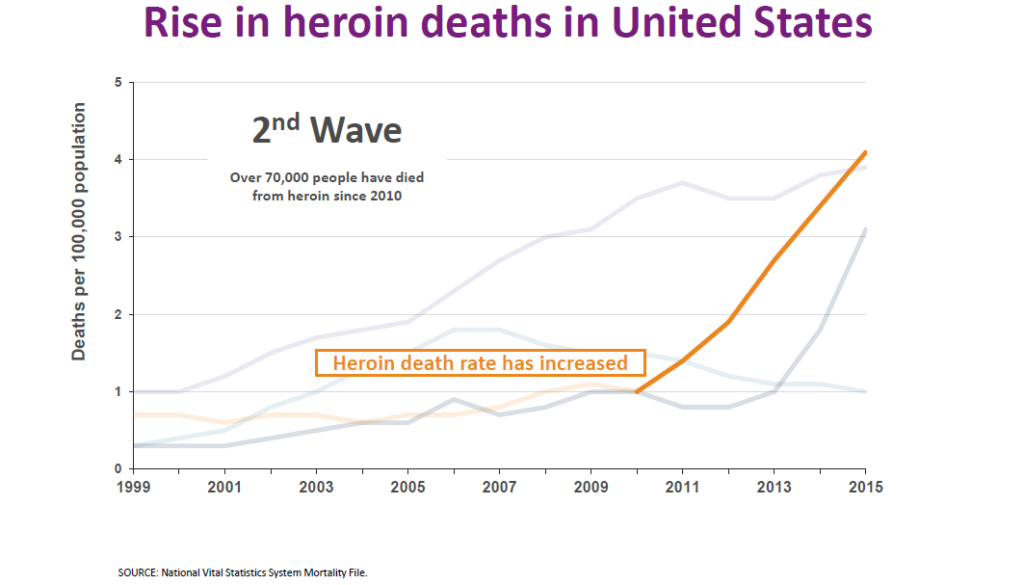 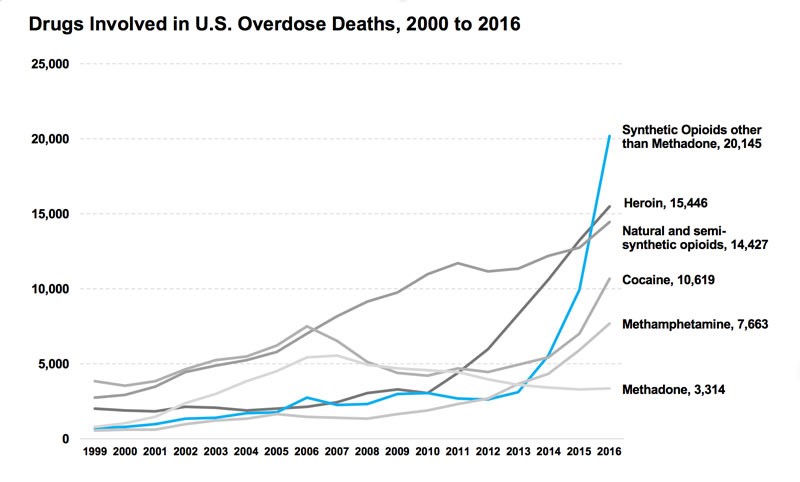 Measured by an Increase in ED visits

Much of the reason there has been increased attention on this issue is due to the increase in emergency department visits and overdose deaths in recent years. ED visits for opioid overdoses increase between 50% and 80% (depending on region) in one 12-month period between September 2016 and September 2017. Larger increases were seen in cities with 1M people. 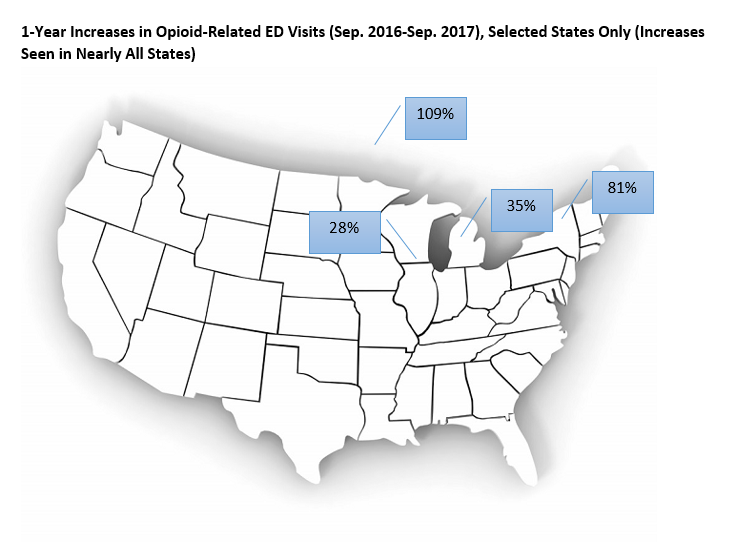 1 out of every 3 opioid prescriptions is being abused (32%).

To get to pre-crisis prescribing levels (pre-1995), we would have to cut prescriptions by 80%.

Q3: When did it get defined as a crisis?

Most analysts say the crisis began in the late 1990s and continued to rapidly increase for 20 years. While it is easy to look back at the data today and see the sharp increase in the crisis, the necessary surveillance was not in place to identify the decades-long build up.

National attention to the issue began around 2015/2016. While you can check out the timeline later on in the course, a few key events can help show when public health officials began to understand the crisis had reached disastrous levels: 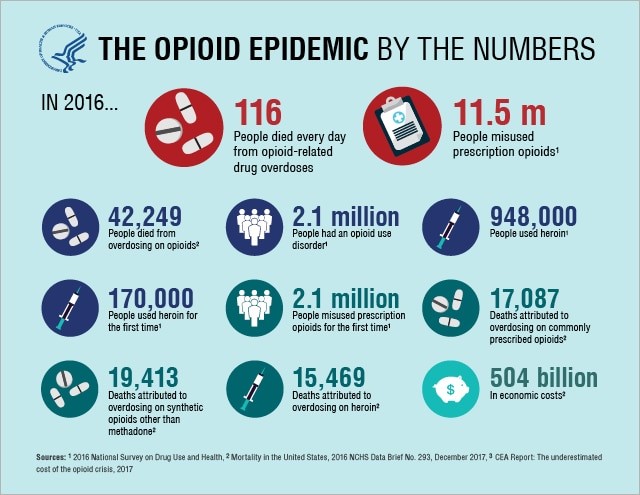 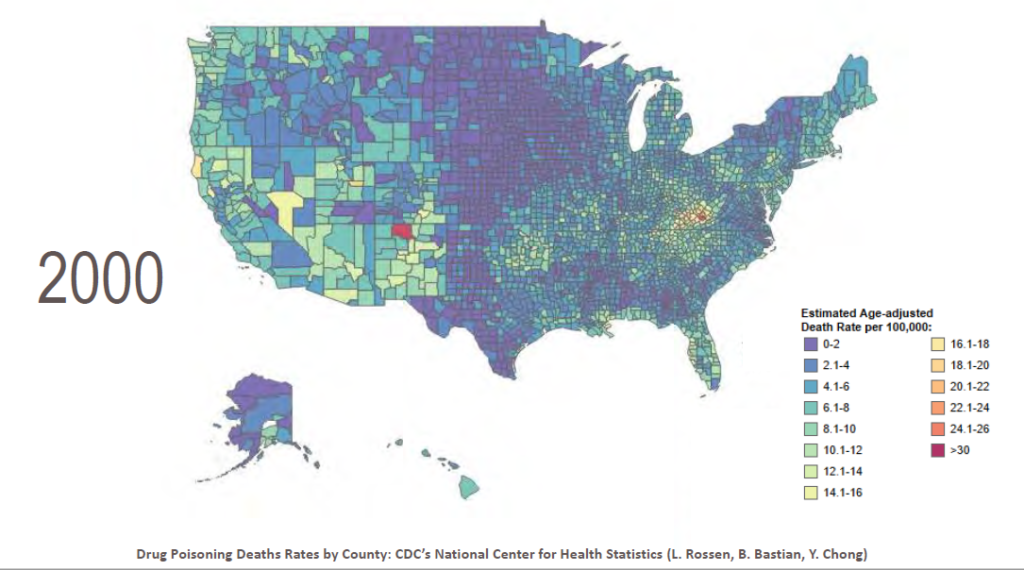 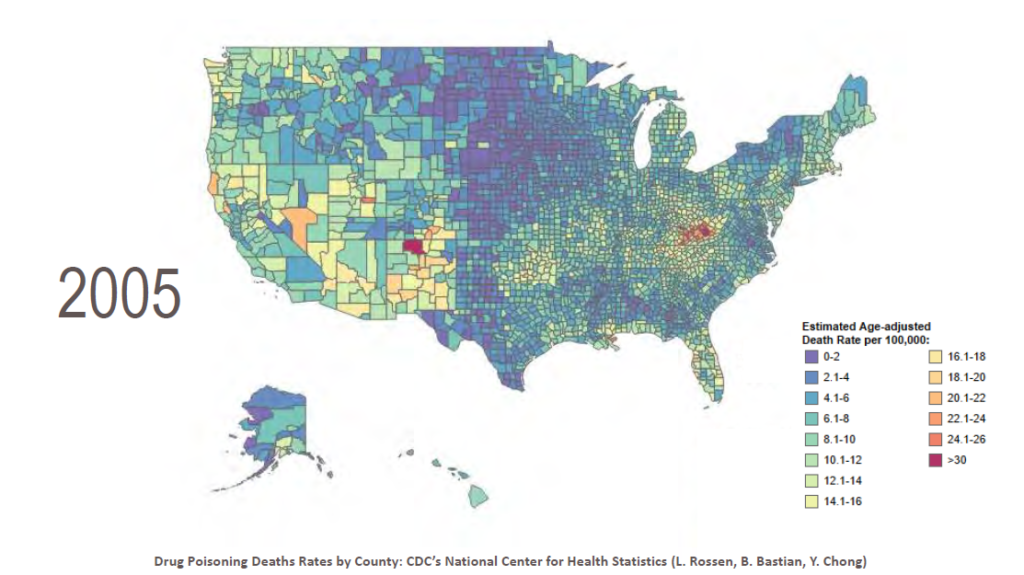 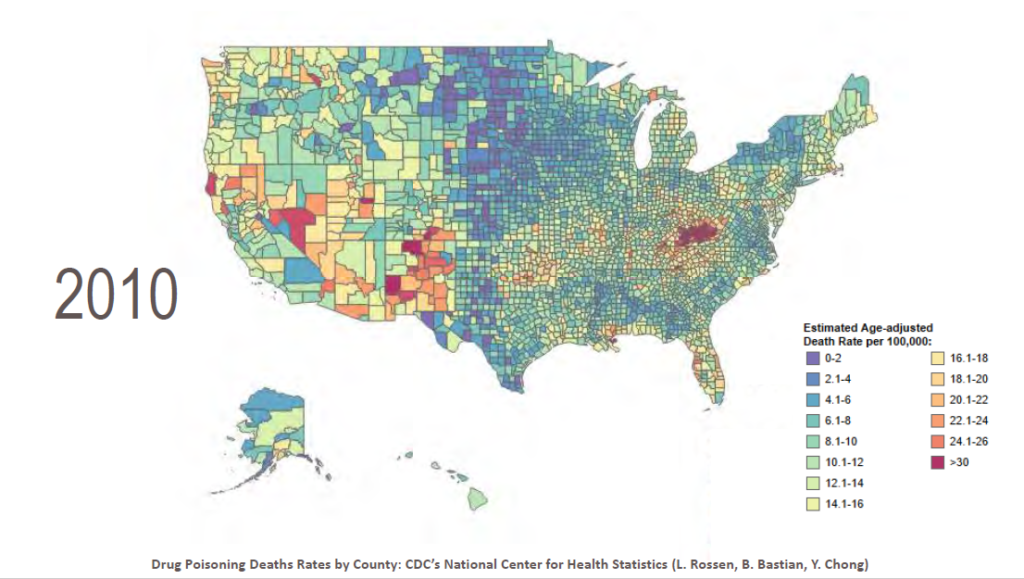 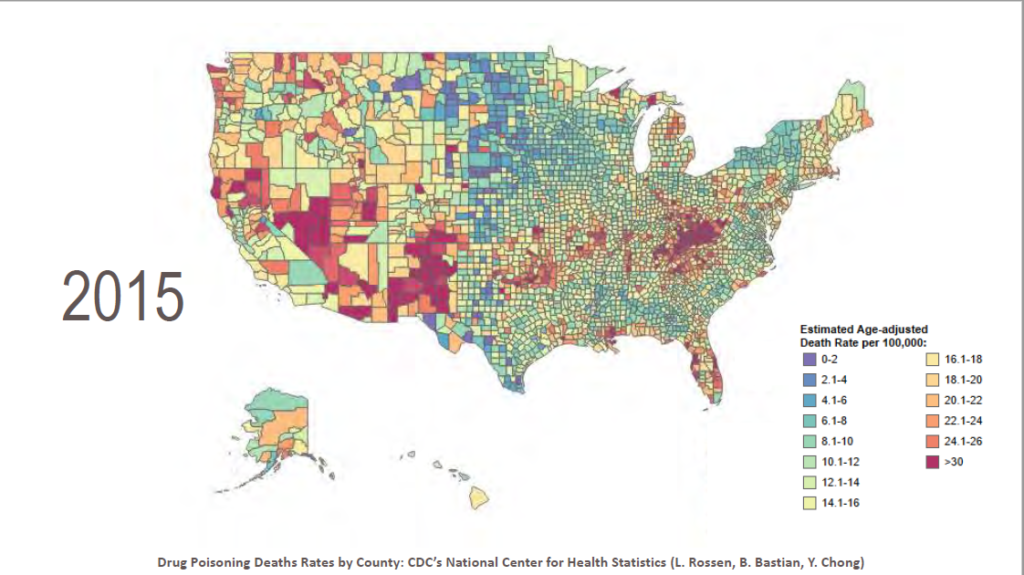 Q4: What are the patterns for who is affected by the crisis?

Several studies have shown that the opioid crisis does not affect all populations at the same level.

There are racial and geographic disparities related to the opioid crisis. Victims are overwhelmingly white persons age 20-34 living in rural areas. Some states and regions are hit harder than others.

Fast Facts About Those Affected by the Opioid Crisis

This chart from the CDC shows that 50% of all heroin admissions were for patients who were white and age 20 to 34 years old. The trend line shows the sharp increase for this population from 2004 to 2014. 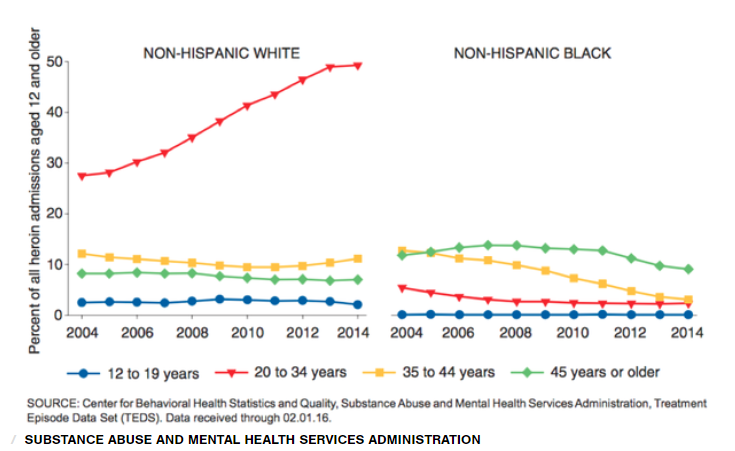 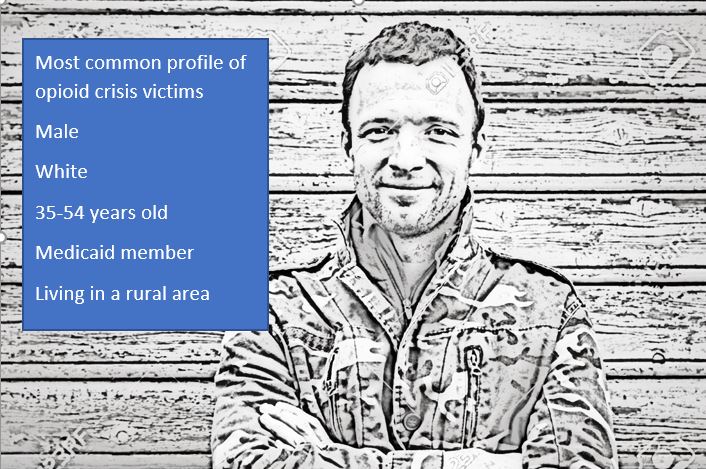 Differences across states and regions

When you look at states hit particularly hard with the crisis, the data is even more alarming. For example, Pennsylvania had the fastest growing rate of drug overdose deaths in the nation (with 43% increase). 5,442 people died in PA from opioid-related overdoses from June 2016 to July 2017. This was compared to 3,979 people in PA who died in the prior reporting reported. 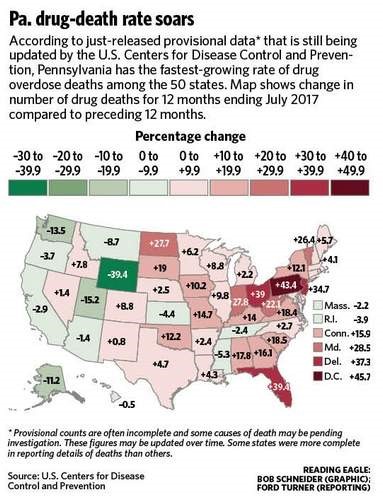 This map from the CDC shows the differences in death rates by region. States with darker red shading have a death rate up to 5x that of states shown in the lightest shading. While states with larger rural populations seem to be hit harder, some larger cities (particularly on the east coast) are also disproportionately impacted by the crisis.

By household income and employment status

This chart from Kaiser Family Foundation shows that the crisis hits poor and not poor families roughly equally. About 53% of adults with opioid addiction had incomes at or below 200% of the federal poverty level (FPL); about 47% of were above 200% of FPL. There is a similar split between working / non-working individuals. 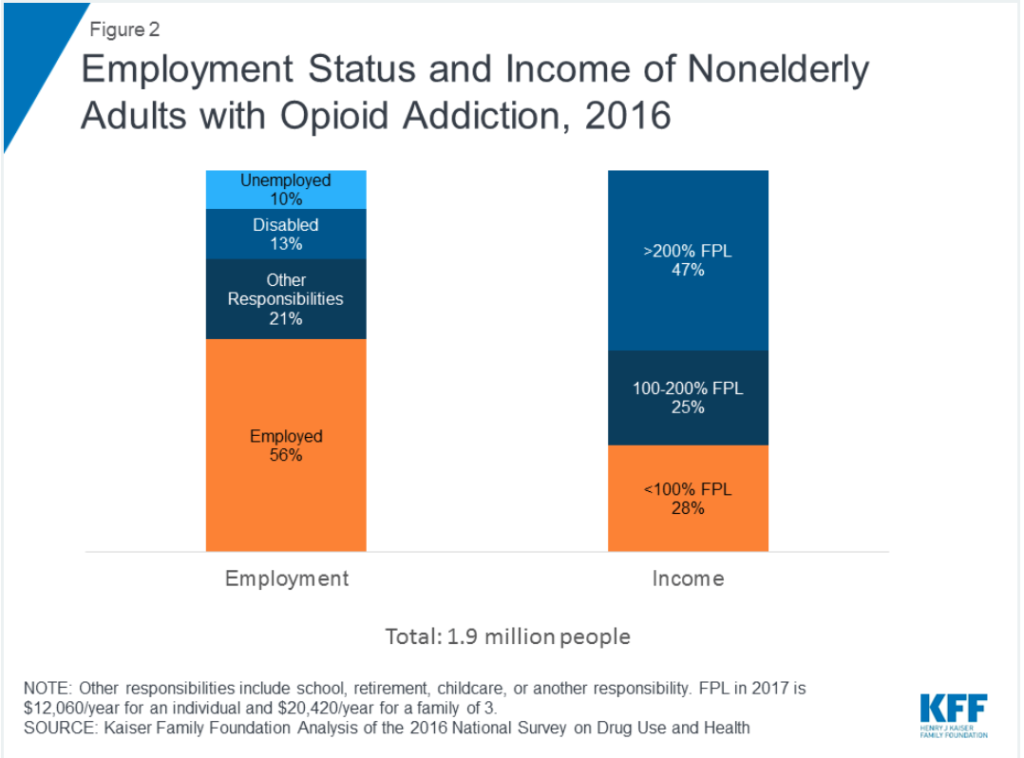 Some populations are more at risk, but the crisis is universal 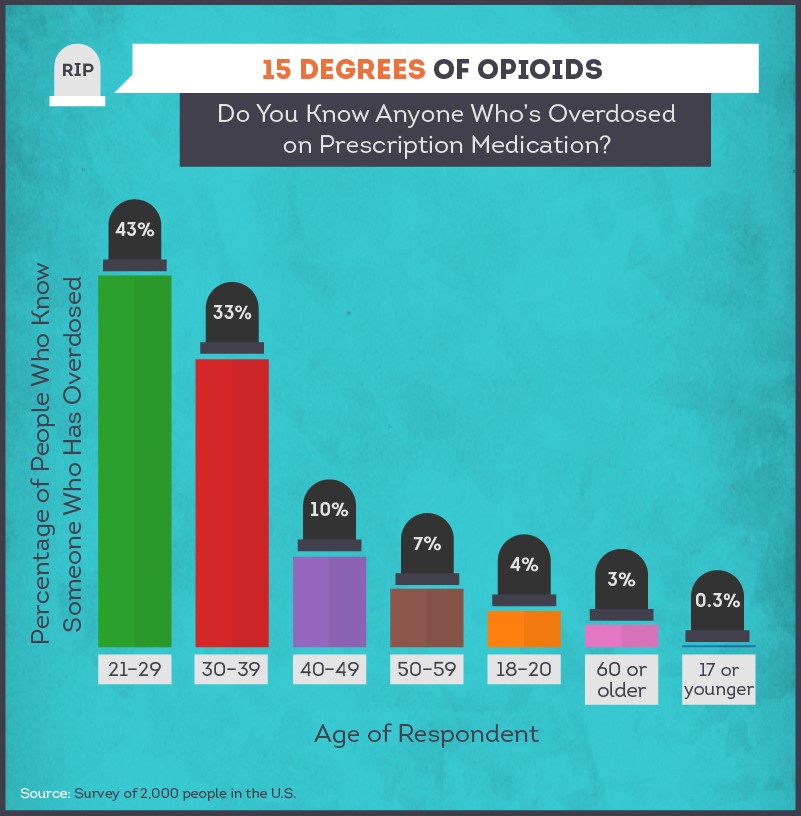